Save for the occasional bag of peanut M&Ms, I avoid eating at airports and on airplanes. And it’s not only because the food generally makes me feel like the before picture in an ad for heartburn and the price gouging is as absurd as the size of a large popcorn and Coke at the cinema. No. I avoid eating in transit mainly because I prefer to arrive in a new city with an appetite. Isn’t eating local — and no, I’m not on a farm-to-table motif here — the best part of exploring a new locale?

Here, five hyperlocal sandwiches to sample across the Stash network.

Primanti Bros. sandwiches stand with the contrapposto of a renaissance sculpture, which is not to say they are in any way slender, but rather that their height and heft give them a natural lean akin to the Tower of Pisa. Imagine a sandwich — two thick slices of Italian bread, a few ounces of meat, and a slice or two of cheese — then add a fist full of french fries, a fried egg, a slice of tomato for color, and a load of coleslaw. Buon appetito!

Shady Side Inn All Suites: A quick fifteen minute drive to the flagship location in the landmark Strip District neighborhood.

The Priory Hotel: A ten minute drive over the bridge to the flagship. 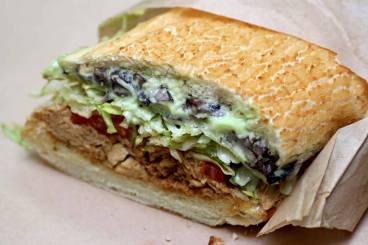 Dutch Crunch: What we talk about when we talk about sandwiches in the Bay Area. For natives, this sweet, crisp length of giraffe-looking bread — the top crust gets its roof-of-the-mouth-scuffing texture (and sweetness, for that matter) from a brushed on slurry of rice flour, sesame oil, sugar, and yeast — is as ingrained in their lives as earthquake protocol and rooting for the Giants or A’s. For outsiders, it’s an unknown treat.

Among world-changing inventions — the wheel, the printing press, the internet — the Fluffernutter sandwich cannot be counted. Unless of course you’re a kid from New England and it’s lunchtime.

The Boston-born sandwich combines a magical corn-based meringue-like mallow known as fluff with peanut butter and the cheapest white bread available. And this rib-sticking goodness isn’t only for kids and lunchtime. Classed-up versions regularly appear on dessert menus at some of the finest eateries in the Boston area. Or if you’re itching for the real thing, consult your concierge at The Hotel Veritas, The Lenox Hotel, and Beacon Hill Hotel and Bistro for directions to the nearest grocery store. 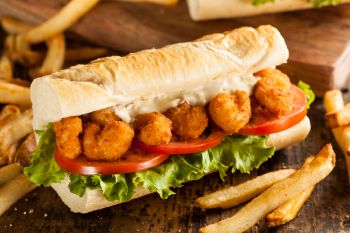 The Po’ Boy sandwich is to New Orleans what Bruce Springsteen is to New Jersey — a regional passion nationally adored. And, if you eat too many Po’ Boys, your jeans will fit like The Boss’s. Well, not exactly the same.

Twelve perfect inches of crusty-on-the-outside-soft-as-a-pillow-full-of-peach-fuzz-on-the-inside French bread — bread so fluffy you’ll want to crawl inside for a nap after eating — traditionally stuffed with flash-fried Gulf-fresh shrimp, some crisp lettuce and tomato for coolness, and a good squeeze of remoulade, the Po’ Boy is ubiquitous around New Orleans. In the eight tenths of a mile that stretch between The Whitney Hotel and the Bourbon Orleans Hotel — inside of which the Dauphine Orleans Hotel, Hotel Mazarin, and Hotel Le Marais also ready guests for a fine NOLA experience — Google lists nearly twenty restaurants that serve the local favorite.

The Oxford English Dictionary defines a sandwich as “an item of food consisting of two pieces of bread with meat, cheese, or other filling between them, eaten as a light meal.” The pork tenderloin sandwich meets this definition on the same grounds that a tomato is a fruit. As commonplace on a menu in Iowa as red sauce in Italy, this caloric stack consists of a bottom bun, a crisp slab of deep-fried pork that eclipses the bottom bun like a dollar bill over a penny, a smattering of classic condiments, and a top bun. Arteries, beware.

Family owned since 1862, Breitbach’s Country Dining, 30 minutes by car from Hotel Julien Dubuque, is the oldest restaurant and bar in Iowa and serves tenderloin sandwiches for lunch and dinner.

2 thoughts on “The Local Menu: The Fluffernutter, Po’ Boys, The Pork Tenderloin Sandwich, and More”