Last October, six people and two dogs embarked on an epic road trip to Albuquerque, New Mexico to attend the annual hot air balloon festival. It was one of the most magical and spiritual trips I will ever experience in my lifetime. What made the trip and the sights extra special was having my husband and brother there to share the memories.

We started in California and made our way east, passing across the North Rim of the Grand Canyon before marveling at Horseshoe Bend, then stopping at the Four Corners Monument and Monument Valley. Each stop was more breathtaking than the last. 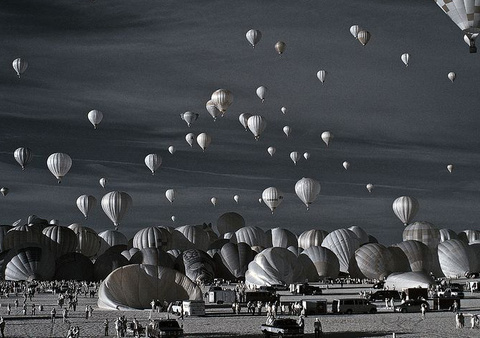 As we approached Albuquerque, we could already see the balloons dotting the sky from the freeway; the excitement level in the car rose to match the height of the balloons. Stepping onto the festival fields later that day, the sense of community and the quality of the energy that filled the air seemed tangible.

That night, I stood among the balloons, all fully inflated but held down, lit like giant Chinese lanterns and floating just above the ground. There were at least 200 balloons. When the operators sitting in the baskets pulled the burners, lighting the ignition to keep the balloons full, everyone cheered.

The next morning we arose at 4am for mass ascension. The balloons were all laid out, and everyone was preparing to launch. Slowly, the balloons inflated and eventually lifted off one by one. I took so many pictures, but none of them compared to what I saw with my own eyes. It made me emotional seeing everyone on the fields cheering and clapping. I went back to California feeling grateful for the experience and for making an unforgettable bond and connection with my family and friends.

One thought on “Travel Less Ordinary: Up in the sky in Albuquerque”