Like every player on the Boston Red Sox roster grows up playing little league, every professional chef who grows up in New England grows up washing dishes somewhere that serves pads of butter with dinner rolls. Chef Lucas Sousa, Executive Chef of Beacon Hill Hotel and Bistro (BHHB), is no exception. At fifteen years old Sousa took a job washing dishes at the local country club where his grandfather took him golfing. When he wasn’t busy scrubbing towers of breadcrumb-encrusted ceramic baking boats, the line cooks taught him how to cook. A few years later, the instructors at The Culinary Institute of America were teaching him how to cook.

Here, Chef Sousa, two years into his dream job at BHHB, reflects on gardening with his Portuguese grandfather, the difference between hotel restaurants and independents, and his admiration for simple-yet-perfect dishes like roast chicken with seasonal produce.

What jobs have you had outside the kitchen?

The only job I ever had outside the restaurant business was painting houses for a summer after culinary school. I planned on moving to a big city to get my career started after saving some money. I didn’t want to get a job cooking by lying and saying I planned on sticking around, so I took a job with a friend painting for his uncle. I had to climb up 40 foot ladders and lean off the side to paint the trims of huge houses. The thing is I don’t like heights. I learned a different skill from it but wouldn’t want to hang off ladders my whole life.

How did you land at BHHB?

I was working at a downtown D.C. restaurant when I took a step back and looked at what I was doing. It just wasn’t the right fit, and I decided I wanted to be closer to my family.

I chose Beacon Hill Bistro for its reputation. The chef here a few years before me was great and made his name here before opening his own place. I just celebrated my two-year anniversary here at the bistro this past month—it’s a great fit for me. I always wanted to be a pastry chef before going to school for culinary arts. We don’t have a pastry chef here at the restaurant, so it’s awesome to be able to do the pastry program and continue to progress.

What are the differences between independent restaurants and hotel restaurants?

So much is different from a chef’s point of view. It is very rare that a hotel restaurant is on the same level as the hotel. Normally the restaurant is a very small amount of the business revenue, so they are not always thought of first and usually the food is only feed to hotel guests. This hotel and bistro combo is great though. We have people come to stay in the hotel that end up eating here every night of their stay. And with so many other options in the area, I take that as a huge compliment.

I definitely run the restaurant like it’s an independent restaurant. Our menu changes with the seasons, which isn’t always true with restaurants attached to hotels. I like to keep it interesting for not only the guests staying here, but for locals too. I would put the food we do up against any independent restaurant. We make all our own breads, pastas, and pastries, and bring in as much whole product we can. We have a lot of neighborhood customers as well as hotel guests dining with us. So our vibe is definitely different in that sense. You feel like it’s a neighborhood place.

Does it feel more like home cooking when you’re cooking for people who are sleeping, showering, and starting their days in the same building as the kitchen?

We take care of our guests like they are guests in our own home, yes. And especially because we’re so small—we only have thirteen rooms in the hotel—we can create an environment that makes our guests feel at home. I will go through my day seeing someone staying with us eat every meal with us. Knowing that they have breakfast, lunch, and dinner with us is a good feeling. I know we are doing our job by showing them that our philosophy in the restaurant is the same as our hotel.

Speaking of home cooking, what were some staples in your house growing up?

My parents were actually not very much into cooking at home. I come from a big Portuguese family on my father’s side. My grandfather was the only one who cooked a lot in the family and he was a great cook. I lived with him for a little while when I was really young. He had a garden in his back yard and would grow all kinds of stuff to cook with. It wasn’t your average home garden for sure. He would grow pumpkins for Halloween for the kids and cooked a lot of the meals based around what the garden produced. He always cooked a big breakfast every Sunday morning.  My father’s side of the family would come over and eat and hang out into the afternoon. It was awesome growing up seeing how food brings people together. 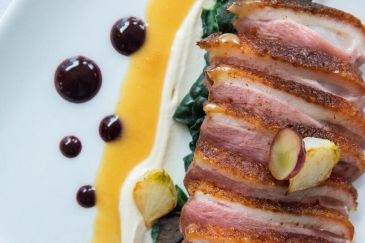 Can we see any of that on your menu?

You can see a little bit of everything on my menu. Not only from growing up, but all the restaurants I have worked in. I moved around quite a bit trying to pick up knowledge from a lot of different cuisines and levels of cooking. It may be French, Southern, or Italian in idea but it is always decidedly based on my philosophy of simple seasonal ingredients. The fewer components you have to the dish, the harder it is to make it right. If one of four ingredients isn’t perfect, the whole thing fails. We try to use only a few core ingredients, allowing them shine through on their own. Roast chicken with some seasonal produce makes a great dish. Some of the most memorable dishes I’ve had have been simple ones. That’s really how I like to cook as well.

You can find Chef Sousa in Beacon Hill, Boston at the Beacon Hill Hotel and Bistro.